Almost one year ago, in November 2015, a huge conference took place at the United Nations in Paris to gather negotiators from almost 200 countries to discuss urgent measures to undertake in order to fight climate change. After 13 days of intense discussion delegates made an important deal: limiting the rise of the global temperature at 1,5 degrees C above pre-industrial levels.

How can a citizen have an idea of the process that brings so many Nations to an agreement? How can a citizen understand the importance of taking measures in order to prevent environmental risks? Exactly one year before, in Hamburg , Rimini ProtoKoll, a theatrical company from Germany dared to put into scene a simulation of the  World Climate Change Conference. It was a huge experiment of participatory theatre.

All the performers of the play were experts coming from different fields: scientists, journalists and professors. Scientist were represented at different stages of their career. Each spectator took the identity of one of the 195 delegates participating in the summit. The opening night was 21st Nov. 2014, and from then the play has been performed 19 times reaching an audience of over 9000 units.

During the Earth sciences and Art EGU 2016 session, we had the pleasure to have one of the performer, Dr Freja S.E. Vamborg of Max Planck Institute for Meteorology, Hamburg, Germany. She is an early career scientist and illustrated particularly the role of young scientists in such a performance and their interaction with the public. 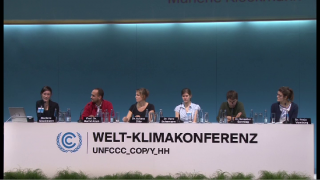 You can see the trailer of the performance in the Rimini Protokoll Vimeo Channel, here.

The images or videos on this blog are not all my creations, but belong to their respective owners. Whenever possible I try to link / quote site / owner of the image, but if you are owners or are portrayed in the images on this site, please contact me and I will add what is necessary, or remove the photos. All trademarks belong to their respective owners.