It was in its third edition our Earth sciences and Art session at EGU General Assembly in Vienna (EGU 2017). It promised to be a fantastic session and it was!!

This year we had the honor to receive as a first speaker Ann Pizzorusso. She already presented her book Twitting da Vinci in the previous poster session while this year entertained us with her studies about the authenticity of the Virgin of the Rocks. There was not a best incipit since we consider Leonardo da Vinci a symbol of our session. We have already written about Ann Pizzorusso in a recent post (click here). Many other interesting works have followed. To mention a few, as last year (see here), we had a couple of an artist and a scientist having a live conversation  this time about earthquakes and dance. Marta Bichisao, a choreographer  and Angela Stallone, a young geoscientist met for the first time during a bla bla car trip, where they shared ideas about their careers. And then, they decided to create something together. How can the energy of an earthquake be translated in the energy of a dance able to raise emotions in the public and deeply involve them in the experience of sensing an earthquake? This is the fundamental question that is pushing  Marta and Angela to find a common field to work on.

And again, we had the pleasure to have Isaac Kerlow, this time addressing his work to children with a delicious short animated film, CHANGE, with the aim of explaining the essence of the anthropogenic transformation of nature operated by humans too rapidly (click to watch). While it was the aim of the artist D. Griffiths investigating the best way to reach the deep future when organizing his artistic-scientifical project about a very hot topic: geological nuclear-waste disposal in eastern Belgium. Sam Illingworth who took part in the project presented it in a poetic way. Finally we had a virtual geological tour on the faraway past of Turin. Vincenzo Lombardo and Marco Giardino accepted to substitute Maria Leira at the very last moment, giving us the opportunity “to fly” through an audiovisual reconstruction of the geomorphologic, climatic and environmental setting of the pre-urban settlement area. 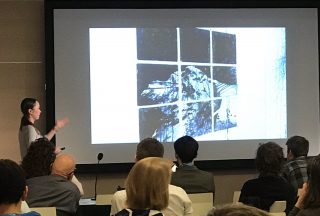 We were also introduced to EMusic, a music obtained thanks to the sonification of electromagnetic data according to a method codified by Menghini& Pontani (see the video presented) We had also the chance of hearing and smelling a comet, thanks to Ekaterina Smirnova. In the picture above she is presenting her project in the slot of orals convened by Niamh Shaw, who also presented her experience with Crew-173. Niamh was for the first time with us in 2015 presenting her dream to go to space in a theatre. She started in a theatre and she ended up in a real simulation set: the Utah desert.She is an engineer but she was there mainly as an artist to capture the human side of the mission.  Their final destination Mars!

We just mentioned few of the interesting works we had the chance to attend during our session. We are happy and fully satisfied for the work done. We will keep on posting whenever possible…

Please take note that now we have a website: http://www.earthandart.org

The images or videos on this blog are not all my creations, but belong to their respective owners. Whenever possible I try to link / quote site / owner of the image, but if you are owners or are portrayed in the images on this site, please contact me and I will add what is necessary, or remove the photos. All trademarks belong to their respective owners.